On August 6th and 7th, during the SummerBall Showdown, the US Military WarDogs hosted two youth baseball combines for the city of Goddard and surrounding communities.  Between the two events, over 70 youth from ages 7-11 participated in the WarDogs combines. Many of the kids that participated had parents serving on active duty or who were veterans. 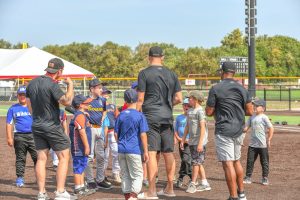 The WarDogs, comprised of military baseball players from all branches of the service, added their own style to create a competitive and fun experience for the youth during these combines. This year, the combine consisted of four events.  Each event was associated with one of the military branches.  Air Force Jets: Fastest time around the bases; Navy Cannons: Longest throw; Marine Sniper: Accuracy of throws; and Army Dropping Bombs: Home Run Derby. 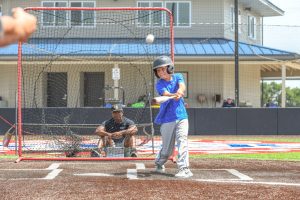 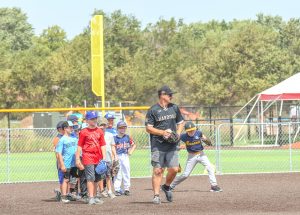 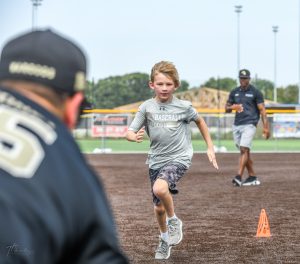 All of the players on the US Military WarDogs National Team were involved in the coordination of the combine events and provided positive guidance towards the children during the combine.  They offered small glimpses to the youth of what it is like being in the military and playing baseball.

As the combine was being conducted the WarDogs made it a point to include the parents into the fun.  Each child was asked, “If you could pick a military branch, which one would you want to be a part of?”  Some of the kids would go into detail about why they chose what they chose.  Midway through the combine, the parents were told what their kid(s) gave as their answer.

“I remember going through the names and answers of the kids and hearing active military or veteran parents laughing or sighing depending on the answer they heard.  For example, when a child of an Army family chose to be in the Navy, I could hear the parents sigh in disbelief.” – Todd Nieuwenhuis, Co-Founder and Chief Baseball Officer for the WarDogs.

Even parents that were not in the military would laugh because they felt their child’s answer perfectly described their personality.

Nieuwenhuis went on to say, “It was no surprise that when I read off Air Force as one of the answers, one of the parents would say, “now that one is smart”.

Overall, the parents and kids had a great time interacting with the Wardogs coaches and players before, during, and after the event.

“It was the BEST experience for not only my son but my husband and I as well.  You guys are beyond amazing for all you did!” – Lisa Mason, parent of youth participant.

“I want to thank everyone that was there for the awesome time my son Brady had.  He came home with a bat, shirt, and hat that he is super proud of.  This was such an awesome experience for him and I thank you guys so much!!”. – Heather Bannister, parent of youth participant.

The WarDogs overall objective in providing these youth combines is to provide the youth in the community with an experience interacting with current and past military service members while having fun with their other kids on the baseball field.

“We always try to incorporate this type of an event when we bring our national team together.  It is important for our youth to know and understand our military and history that we are a part of”.  – Bruce Jazwinski, Founder, Chief Executive Officer.

For the city of Goddard and the surrounding communities, the WarDogs hope to be back next year and make it an even better experience for the youth and their families.  Please donate to help us provide opportunities for the youth to experience a fun and meaningful event with our current and past military members.

The US Military WarDogs national team recently competed in the annual SummerBall Showdown in Goddard, Kansas.  This was the WarDogs second year in the tournament, and the team showed incredible growth and competitiveness against high level collegiate and independent baseball clubs that traveled from around in the US to compete in the tournament.

During the WarDogs first game of the tournament, they were matched against the PSCL Select team out of California.  Although a very close and hard fought game, PSCL was able to hold of the WarDogs, winning 8-6 in nine innings. 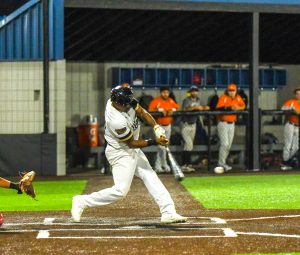 On the second day of games, the WarDogs played the Dirtbag Baseball team. The Dirtbags, who would go on to with the entire SBS tournament, were victorious in this game as well, by a score of 7-3.

The WarDogs final game of the tournament had them matched against the 316 Baseball Club.  Unfortunately, 316 Baseball handled the WarDogs national team, winning by a score of 12-3.

Despite not advancing to the second round of the playoffs, the entire WarDogs team was honored to be able to represent our Military, Veterans, and Fallen on a national stage.  The team came away from the tournament more motivated than ever to be back next year.

Ricky Orellanes, one of many new players on the WarDogs national team, had this to say of the SBS: “We’re winning this next year, I’ve got the boys hyped!”  Orellanes was honored and humbled to represent US service members on the baseball field, and walked away from the experience ready to come back in 2023. 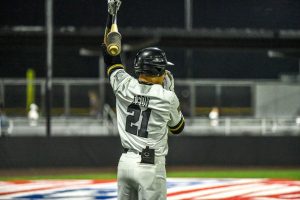 Of the players representing the WarDogs in the SBS tournament, 19 were Active Military and 5 were Veterans.  All branches of the U.S. Military, which include Army, AirForce, SpaceForce, Navy, Marines, and Coast Guard, were represented within the ranks of the 2023 national team.  Kenny Kirker, an active Navy servicemember, flew all the way from Bahrain to be part of the WarDogs.

Although the WarDogs strive to compete and win, the WarDogs do more than just playing baseball.  During the tournament, the WarDogs conducted an on field flag ceremony before one of the games to honor 30 Fallen Heroes.  During the flag ceremony, one of the families of a fallen servicemember was presented a folded American flag in honor of their loved one.  Beyond the Flag Ceremony, the WarDogs also hosted two youth combine events, allowing local Goddard youth the opportunity to get on the field, and participate in baseball drills with WarDogs players and coaches. 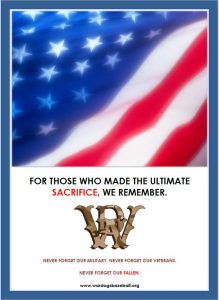 Step up to the plate and support us.